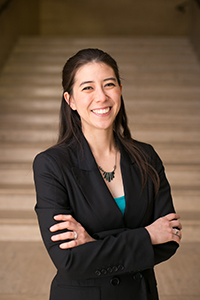 Mika Kennedy is a doctoral candidate at the University of Michigan working at the intersections of critical ethnic studies, the environmental humanities, and American literature. She will defend her dissertation, Crossed Wires: Japanese American Incarceration and the Environmental Frontier in Winter 2020.

About My Work
Crossed Wires draws on ecocritical and settler colonial frameworks to theorize the relationship between immigrant and indigenous populations in the United States, as they are produced by relations to land and acts of environmental transformation. In conversation with scholars such as Kelly Lytle Hernández, who has consolidated images of the U.S. carceral state across seemingly disparate histories of Native elimination, racialized policing, and border consolidation, I am additionally informed by a growing body of incarceration work in the fields of environmental history and geography. In Crossed Wires, I posit environmental transformation as a core element of Japanese American incarceration, taking an emphatic look at the way the War Relocation Authority’s agricultural projects rhetorically and materially sought to reclaim the “frontier” West for the U.S. (white) settler state. I examine how the stakes of the incarceration shift when it becomes not only an act of racial exclusion and war hysteria, but also a conscious reiteration of the settler colonial frontier—a frontier which, in the confines of an incarceration camp, is quickly denuded of its fantasies of a free West. In turn, I explore the ways Japanese Americans narrated their own relationship to their camp environments, imaginatively traversing geologic time; performing cowboy outlaw; and confronting the Native erasures that subtend every frontier “success story.”

My project’s primary intervention lies in its ecocritical approach to narratives of Japanese American incarceration, which illuminates the ways that Japanese Americans’ imaginative encounters with their environment express alternative ways of being and belonging in a place. These ways of being foreground Japanese Americans’ relation to Native peoples, as guests on their land and as potential accomplices against the U.S. settler colonial state. I envision a Critical Ethnic Studies inextricable from the concerns of Native Studies, and an American Studies that takes these relationships as its heart. In a contemporary moment where a U.S. military fort can serve as a prison to Native warriors during the 19th century, a prison to Japanese Americans in the 20th, and a prison for border crossers in the 21st, examining the intersections between critical ethnic, Native, and environmental studies is more crucial than ever to imagining just—and radically different—futures.

WHY “ILLITERATURE.ORG”?
Because being hardline about the distinction between high and low culture is intellectually lazy.